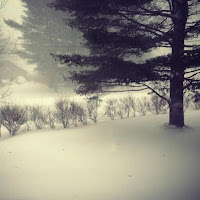 In the couple of weeks leading up to today, Saturday, Feb. 9, 2013, the weather has been cold, but without much snow.  I was planning to go to Quebec City to see Ludwig and the Winter Carnival. Then winter storm 'Nemo' showed up.  Well, so much for planning.  We're expecting 18 to 24 inches of snow.  I'm at home ready to fire-up the woodstove in-case we lose power and waiting to run the snow blower once it stops snowing.  Right now, it's snowing sideways at about 25 mph and gusting to about 35 mph.  At least it's warm inside and a good time to catch-up on some blogging.

Last February a friend posted a YouTube link to The Discovery Channel's, "How Beer Saved the World", which aired the year before.  About 18 minutes into it, Dr. Gregg Smith, Author and Historian, talks about river water being contaminated by raw sewage and how drinking it would make you sick. The narrator goes on to say that Dr. Charlie Bamforth, Professor of Brewing Science at UC Davis, conducted an experiment taking a sample of water, tainted with fecial coliform bacteria, from a duck pond, brewing beer with it, and thus “turn[ing] deadly water into drinkable beer”.

Hmm.  Really?  I had to investigate this.  It is a common assertion that prior to the advent of beer, people got sick and probably died from bacterial infected water. In The Time Traveler’s Guide to Medieval England, author Ian Mortimer writes, “As most prosperous peasants have an aversion to drinking water—which is liable to convey dirt and disease into their bodies—they drink ale exclusively.”  We now know that when brewing with hops, it requires boiling to isomerize alpha acids to increasing bitterness and shelf-life.  I suppose if one did not have access to a spring or well, between boiling the wort and fermentation to alcohol, ale and beer probably did save lives.  I also wondered what recipe did Dr. Bamforth used and how it tasted?  This was really intriguing to me.

I contacted Dr. Bamforth on February 15, 2012, for any papers, notes, or advice on this project.  Unfortunately he said:

"I hate to disappoint you, but that was pure television.

The producer's aim was that we should demonstrate that the boiling
stage kills off coliforms [sic] and this we most definitely did, of course.
But there was certainly no brew taken to completion - heck, the
cameras were only here for one day. The beer we were drinking was
commercial. I guest they call that artistic licenses. I resisted for quite
a time the notion that we should be ostensibly be filmed drinking this
duck pond beer, but finally relented.

As regards whatever they gave people to drink in the bar in a later
scene, I have no idea. It certainly wasn't anything brewed here and,
truthfully, I had no idea they were going to do that.

In this day and age and with the availability of pathogen-free water
I would certainly not advocate for beers brewed according to that
particular historical precedent.


Undaunted, I contacted the Maine Division of Public Health Systems, Health and Environmental Testing Laboratory, for help.  They gave me advice on which test to order, how to collect the sample, and detailed instructions on shipping.  I collected several gallons of water from a local pond on an estate.  The isolated location of the pond, away from roads, agricultural land, farm animals, and other sources of inorganic chemicals, yet being close to wildlife, made this the ideal pond for collecting water for brewing medieval ale.  The sample was collected on February 27th and shipped to the lab the same day.

While all of this was going on, I was finishing up some other projects.  I had been interested in all-grain brewing for some time and decided that if I was going to give it a shot, I would need some new equipment.  I made a mash-tun out of a cooler and turned a stainless-steel, half barrel (15.5 gal.) keg into a brew pot with a lid and spigot (I'll blog about that later.).  I was also researching a good, basic, medieval ale recipe to start brewing from and found the work Tofi Kerthjalfadsson (m.k.a. Paul Placeway) had done.  His sources came from Judith Bennett's book, Ale, Beer, and Brewsters in England.  I used the recipe and technique from his fourth batch, but added ¾ oz. East Kent Goldings hops as a preservative.

I have to admit, the pond water was pretty smelly and needed some straining before adding it to the brew pot on March 3rd, 2012.  I used it in the starch conversion process, or "saccharification rest", and then in sparging.  Once I collected about 5.5 gal. of wort and boiled it, the smell went away.  It fermented to almost 8% and I bottled it on March 11th.  In hind-sight, it needed more time in the secondary fermenter.  (Oops.)

The lab results were somewhat disappointing.  It was tested for the presence of coliform and E. coli.  The test results were positive for coliform, but negative for E. coli. Coliform bacteria naturally occur in soil, on vegetation, and in outdoor water sources such as ponds. They may not cause serious illness on their own, but are easily cultured and usually used to indicate the potential presence of pathogenic organisms of fecal origin.  While coliform infected water is gross and nothing you would want to drink; the experiment would have been more fun with E. coli.

I tasted the ale on March 31st, 2012.  It was strong and malty, but mostly over carbonated.  In fact, even after chilling down to 40 degrees, the bottles exploded in foam until very little was left in the bottle.  I had to pour out all 50 or so bottles to avoid a catastrophe in my basement later in the spring or summer.  Still, it tasted pretty good and I didn't get sick.

I had a pretty busy brewing and project schedule last year, so I didn't get to try again.  I'll probably give it another go this spring (2013).  I'm hopeful the sample will test positive for coliform AND E. coli.  If it does, I'll have the fermented ale tested before bottling it.

As an aside, through the Middle Ages in England, "ale" referred to beer that was made without hops.  Instead, it was spiced with other herbs and called "gruit".  Beer spiced with hops was referred to "beer".  Later, as hops were more widely adopted, "ale" referred to a strong beer and was spiced with hops.  The two terms have since been used more interchangeably, though Porter and Stout were never referred to as "ales". Also, water, as an ingredient, frequently gives beer its distinctive character.  Martyn Cornell has a great article on the history of water on his website, Zythofphile, that I would recommend reading.